Among the most beautiful towns in the province of Almeria is Maria, which is characterized as having an excellent white landscape and an exuberant nature of beautiful pine trees.

Part of its municipal area is in the Sierra Maria-Los Velez Natural Park, which is characterized by its rugged mountains with masses of pine and holm oaks, as well as by the archaeological wealth of its deposits and caves.

Its urban nucleus is located over 1,000 meters above sea level, on a slope that is covered with snow until the arrival of spring. This makes Maria one of the few snowy towns in winter in the province of Almeria. 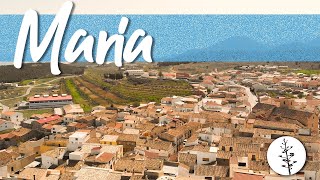 It is precisely this privileged location that makes Maria one of the best places to cure hams. The pieces cured in Maria are some of the best in the province of Almeria.

Maria is the ideal place to visit any season of the year.

During winter, Maria fills up with tourists who enjoy the snow, while in summer, the mild climate makes Maria the perfect getaway to escape the summer heat.
About ten kilometres from the urban centre is the source of the Guadalquivir river, which makes the area a hotbed of tourists and visitors who enjoy the natural wonders that the Los Velez region offers.

Worth highlighting is the Church of Our Lady of the Incarnation, which was built in the 16th century and has been declared a Historic-Artistic Heritage of the town, being the oldest building in the town.

In addition, you cannot miss a visit to the Sanctuary of the Virgin of the Head, which is considered one of the most beautiful places in the Los Velez region.

The sanctuary was built in the 16th century next to a fountain where, according to legend, the Virgin appeared to a shepherd.
A great time to visit this sanctuary is at the end of April, when parish festivals are held in honour of the Virgin.

If you are interested in experiencing the native flora in-depth, be sure to visit the Umbria de la Virgen Botanical Garden, which is located in Sierra Maria-Los Velez Natural Park.
Los Velez Travel Guide