Did you know that the biggest nudist beach in the world is in Almeria?

The largest nudist beach in the world is in Almeria: it is El Playazo Beach located in Vera and is 4,000 metres long, of which 1,400 are dedicated to nudism, which is also known as naturism. 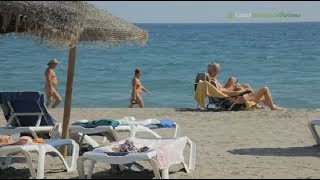 In 2013 an event called the "World´s largest skinny dip" was held in which 729 people met to break the Guinness World Record for the largest number of nudists bathing at the same time, dethroning New Zealand that held the title with 506 nudists in a shared bathroom.

In Almeria there are around 25 beaches in which nudism is practised, but El Playazo Beach is the largest and the activity is carried out with the support of the city council and in collaboration with the Spanish Federation of Naturism.
In Almeria you can do many activities, including bathing at the biggest nudist beach in the world.
Vera Travel Guide