The rise of adventure tourism and institutional promotion of non-traditional tourist destinations are part of the appeal of the caves, cracks and caverns in the province of Almeria: It includes these caves of great scientific and cultural value with the long list of treasures that Almeria offers its visitors, both from abroad and locals.

Tens of thousands of years have contributed to the formation of these speleological features, showing the result of the effects of water and other mineral compounds on the rocks and walls. Deserving of credit are the the competent authorities who control and protect these spaces, and we must mention of course, the awareness and respect of the fans and experts who visit the caves.

Almeria has such a variety in its tourist destinations that even counting only among its caves has an important plurality, which allows them to be enjoyed by both experts and young amateurs who will enter the earthly depths for the first time.
You need not be afraid to get lost in this tangle of bends, plaster and limestone, since at all times you will be accompanied by an expert guide who will ensure your safety while providing you with the information which will give you a greater appreciation of these fascinating underground systems. In addition, you will be provided with essential safety equipment so that your enjoyment of the expedition is your only real concern. 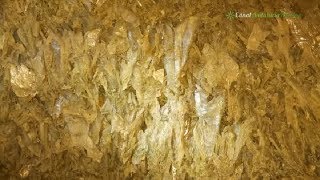 This renowned collection of caves, canyons and dolinas is one of the most important natural destinations in the whole province. It is located in the municipality of Sorbas, in the region of the Levante of Almeria.

The geological formations that are known as karst are defined as a relief form created by the chemical erosion of certain rocks composed of minerals that are soluble in water. That is to say, they are formed by elements that were eroded or dissolved due to the persistent effect of water on these rocks, forming depressions and other forms of relief.

In this case, this interconnected system currently has 25 known inputs and is called the "Water Cave System". The effect of the Aguas River was responsible for forming the karst, which is estimated to have a length of more than 7 km, which undoubtedly makes it the largest complex of caves made of plaster in the country. Currently, with the collaboration of explorers and scientists, the amount of information available is still growing. It is a tourist destination that, although very old, continues to surprise visitors.

It is also an important destination for school or corporate explorations that can serve as a stage for further activity among colleagues, which deepens work or academic ties. 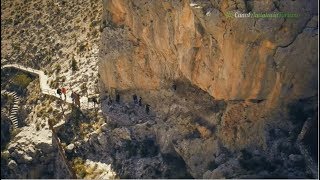 In the Sierra Maria-Los Velez Natural Park there is a large number of caves, many of which preserve the history of the ancestral human beings who decided to record cave paintings on the walls.

Here you can find the famous Los Letreros Cave, Ambrosio Cave, El Gabar Cave and the “Abrigo de Las Colmenas”, although this last one is not exactly a cave.

It is also protected by the World Heritage of Humanity (1998) that watches over the rock formations throughout the Iberian peninsula. In Almeria, this includes a set of 8 systems of caves that preserve this ancient art. In particular, in the “Abrigos del Maimón” in Velez-Blanco is the aforementioned Los Letreros Cave; a favourite destination for lovers, where you can be enchanted by the ancestral mystery of Almeria.
Activities in the province of Almeria
The best Tours & Activities in the province of Almeria


More Articles
Things to do in Almeria (IV)

Things to do in Almeria (III)

Things to do in Almeria (II)