Javier, a Cordovan resident in the city of Almeria, has worked as an ITV inspector for almost 14 years. A disability led him to stop working. Currently, he is dedicated to studying and his great passion: drones.

Javier has a YouTube channel that deals with filming paradisiacal and emblematic landscapes in the province of Almeria. He says that his main objective is "to promote tourism and culture", which he does in an altruistic and disinterested way.

Javier intends to continue filming places of cultural, social, and tourist interest in different regions of Andalusia, so that later the videos can be viewed internationally on platforms such as YouTube, the official websites of municipalities and towns, etc. 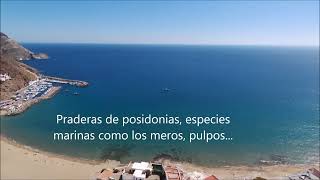 He defines himself as an ordinary boy with basic means, but with a great desire and enthusiasm to collaborate in overcoming the chaos that tourism is suffering.

His videos not only are recorded as such but also introduce music and illustrative and explanatory texts so that the viewer has brief reviews of the place, making mention of flora, fauna, orography, and historical events.

Confinement due to the COVID-19 pandemic brought out his creativity. With the stills on his hard drive, he wanted to create videos on current affairs, such as: "Tribute to all the people who take care of us in these difficult times, to the people with disabilities and to whom we are confined at home" or "Let's fight against the coronavirus", both translated into English. He, in turn, has translated some of his videos into Chinese and Arabic to reach more people. In short, Javier defines his project as: "A very nice project, which causes me great enthusiasm and desire every day." In his spare time, he writes stories, incorporating them into some of his videos as "Fleeting love".