10 reasons to visit the Alcazaba of Almeria

The Monumental Complex of the Alcazaba of Almeria is a Muslim monument of great archaeological value, and one of the most important in the Iberian peninsula.

Because it is one of the most important and attractive tourist attractions of the region, we have compiled 10 reasons why you should visit this monument of historical and cultural character

1. In addition to being considered one of the most significant Muslim archaeological structures in the Iberian Peninsula, this is also the largest and most extensive after the Alhambra in Granada. 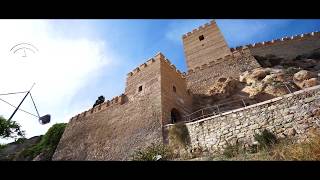 2. The Monumental Complex of the Alcazaba is visible from anywhere in Almeria, and from the heights of its imposing walls you get an incredible view of the city and the bay.

3. Abd al-Rahman III, the first Caliph of al-Andalus, ordered the building of the Alcazaba on the remains of an old fortress in 955AD.

4. The land on which this Muslim monument was built used to be an old cemetery containing houses. However, at present the land is covered with Arab gardens and beautiful bastions that allow you to enjoy the view to the port, the city or the interior.

5. In 2004 the Walls of "Cerro de San Cristóbal" and the Monumental Complex of the Alcazaba were declared “Bien de Interes Cultural”.

6. Teaching workshops are organised for children throughout the year. Visits are free for citizens of the European Union.

7. The whole area is designed with three internal enclosures: the first one is formed by a very extensive and reconstructed area, full of cisterns from the Muslim period. The second enclosure is the place where the great palace residence of king Almotacín of the 11th century was located. In the central part is the Government House or reception area of the Palace. When you walk through its three enclosures you have the feeling of having travelled back in time into the medieval age.

8. After the city was taken by the Catholic Monarchs, they ordered a Christian castle built in the last enclosure of the Muslim fortress, which was accessed through a drawbridge. In this castle is a large courtyard with three semicircular towers and a moat. This is the most modern area of the whole enclosure.

9. The Walls of Jayrán and the Walls of “Cerro de San Cristobal”, although they can be seen from inside the monument, are inaccessible to the public.
10. The second enclosure, although largely destroyed, is a small palatial city made up of houses, a mosque, baths, cisterns and "troop baths" (resembling Roman baths). Many areas of the Alcazaba are in the process of restoration.

After reading these 10 reasons, why wouldn't you want to visit this incredible place in Almeria?.
Almeria Travel Guide