Mojacar is a small town with many stories and many reasons for its visitors to enjoy its streets, its people, its typical meals and its lush beaches.

The Sierra Cabrera serves as a setting for its white houses that give a unique touch to Mojacar.

Here are 10 more reasons to visit Mojacar and delight in this small town of Almeria, surely you will not regret! 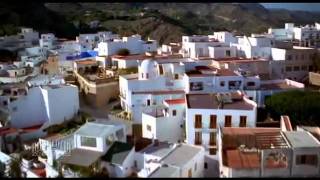 1. Beautiful streets: Its peaceful streets are rich with history. People who are fascinated by history will be able to find sites with remains from the Neolithic era - the Cave of Algarrobo is a fascinating example.

2. History: The reason why there are so many stories and legends among its streets is in its proximity to the famous Sierra Almagrera, which attracted Phoenician and Greek settlers in the High Imperial era. These people brought great economic growth to the region, based on the mining of precious stones.

3. The fountain: This is the most striking point of the city: Tourists and residents all agree on this. For several centuries it has been the meeting point for everyone who comes to Mojacar. From its twelve pipes emanate crystalline waters that also provide irrigation for the whole population. In addition to the this, the fountain serves as the stage for chamber concerts during the warm summer nights.

4. Festival of Moors and Christians: It is one of the town's most traditional festivals and is celebrated in June. It is among the most picturesque events in the entire province of Almeria.

5. Camel rides: These exotic animals crossed the Mediterranean Sea from the desert of Morocco and have stayed here since then. Thanks to them, locals and visitors can enjoy an unusual ride on their backs full of fat and water.

6. Its fish: Due to its proximity to the sea and its Arab and Greek influences, the gastronomy is based on the delights of the sea.

Among the fish that are prepared in unique ways are: “meros”, “pargos”, “sargos”, “jibías”, “besugos” and “gallopedros”, among many others.

In Mojacar no complex preparation is required, thanks to the freshness of the fish. The locals only add salt and lemon, then put them on the barbecue; perhaps this is their great secret.
7. Typical dishes: Among the delicious dishes stands the red prawn of Garrucha. If you are going to Mojacar, you really must try the seafood stews that are accompanied by potatoes. Another of Mojacar's original dishes are the sun-dried vegetables, which are then used to give colour and flavour to the stews. They do the rice in various different ways: “al caldero”, “marineros”, “al horno” ... there are so many that there is no room in this post to list them all.

8. The tapas: As in all Almeria, Mojacar is no exception with their tapas tradition. In all the bars, various delicious tapas are served to accompany drinks and long conversations.

9. The Mojaquera coast: This is only a couple of kilometres from the village, and you can easily reach it through the Andalucia Avenue. The view is spectacular: white houses inspired by the Mediterranean with a balance of aesthetics and height that give a totally magical landscape.

10. On the beaches you can get: Restaurants, bars, cafes, hotels, shops, among other things, so you will not have to carry thousands of things around in your bag. There are several companies that offer entertainment of all kinds, as well as providing a wide variety of delicious gastronomy.
Mojacar Travel Guide