Picture: Wikimedia Commons
An impressive underground world, this is an arid underground area with a karstic structure that attracts thousands of visitors from all over the world. It has been formed over millennia by rainwater and represents a unique place in the world.

It is located in Sorbas, northeast of the province of Almeria. It offers a set of caves that will leave you speechless.

Why know the Karst en Yesos in Sorbas?

If you want to live an incredible adventure underground, you cannot miss the Sorbas caves, located in the Karst en Yesos Natural Park, which houses a labyrinth of more than 1,000 caves, most of which are interconnected. 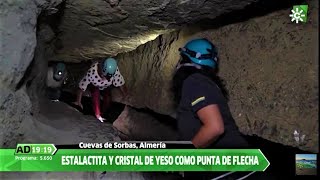 This underground world is the result of thousands of years of erosion caused by rainwater, which slowly dissolved the soft gypsum rock. These stunning otherworldly landscapes and underground rock formations were declared a Natural Protection Area in 1989.

To visit them, you should do so with experts. During the exploration, you will pass through the various networks full of stalactites and stalagmites that have formed over the centuries from mineral water that has filtered through the upper rocks to create spectacular formations.
This underground world has a great educational and scientific value, as well as an outstanding speleological interest. It has become one of the most important gypsum karst deposits in the world, an authentic geological treasure and truly one of the geological jewels of Andalusia.

How were the Sorbas Caves formed?

These caves began to form more than six million years ago, when the Mediterranean Sea was above the Sorbas basin. Little by little, an evaporation process revealed what was on the Surface. The large amount of gypsum present in this place is very interesting.

When the gypsum rocks and other sediments were exposed, the slow but fundamental action of the rain began, as it is this that created the karstic landscape, generating an unusual beauty.

Why are they called karsts?

Rainwater is capable of dissolving gypsum rocks over a long period of time, through the formation of depressions on the surface. Due to this process, karst windows, sinkholes and chasms are born. For this reason, a large number of connections are created, from the surface to the interior of the underground caverns.

The karst works like a great sponge that collects and stores all the rainwater and later goes outside through springs.

After all these stages, the largest underground system in Spain, and the second largest in the world, with regard to gypsum was created, with a route that exceeds 8,000 meters.

There are a large number of caves, almost all interconnected and containing a great diversity of crystalline minerals that form stalactites, stalagmites, columns and corals.

Routes and activities in the Karst en Yesos in Sorbas

This beautiful place offers different activities that will fascinate you, especially if you are an adventurer who wishes to explore and discover underground caves.

The town of Sorbas is a simply unique place, greatly influenced by the Arab culture due to the former dominance of the different Arab groups in Spanish territory, leaving several legacies such as the urban structure of the population.

In addition, Sorbas boasts unique products originating from its artisan tradition full of influences that are reflected in its crafts, architecture and gastronomy. You will be amazed by the originality and variety of the place.

The most frequent activity in this natural area is caving, as there are several routes with different durations and levels of complexity, in which you can explore one of the largest karst systems in the world.

Another outstanding activity in the area is hiking, as there are unique formations not only inside the caves but also on the Surface. The best way to appreciate them is through this activity. We can start in the Yesares and go through Marchalico-Viñicas, where you can see an immense steppe full of life and the Aguas River, which contrasts with the arid and desert environment of the place.
Levante Almeriense Travel Guide

The best beaches in Almeria (II)