Partaloa is located in the Almanzora Valley region, at an altitude of 544 meters. It is a beautiful town with few inhabitants, mostly from other lands, who have actively integrated into the town due to the simplicity and warmth of the Partaloa people.

Partaloa is surrounded by natural formations known as organs due to their resemblance to this musical instrument. They are rocky masses. It is a territory that has historically passed through different owners and names, but it was in the 19th century when it definitively came to be known as Partaloa.

What to visit in Partaloa

To enjoy Partaloa, one can walk its quiet streets; visit the Church of Saint Anthony of Padua, the most relevant monument in the municipality, built on the previous temple destroyed by the earthquake of the last century; and visit Constitution Square, the Garden of Equality, the Fountain ...

When it comes to nature, a visit to the Partaloa Viewpoint or Balcony of the Almanzora is a must. It has a 50-meter wooden walkway, with benches, and ends in a closed balcony from which you can enjoy a 360° panoramic view of the town and its surroundings.

What to do in Partaloa

Hiking and biking are the most prominent activities for visitors. 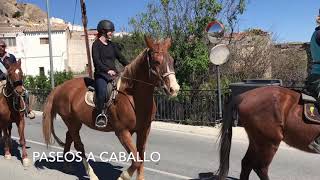 You can do a route of 9 kilometres, of moderate difficulty, beginning in the town and reaching the “Estrechos del Ciscarico”, a walk done in a row through channels where erosion has been vertical.

You can also do the San Anton BTT route, in which clubs and hundreds of cyclists participate.

It is a 28-kilometre route beginning in Partaloa and running through the entire Partaloa environment.
Partaloa is one of the points of greatest solar radiation in both the Iberian Peninsula and all of Europe. That is why a solar park has been installed in Partaloa that produces energy with a power of 1,300 kWp. Thanks to this, its districts have grown with new and modern infrastructures.

Among its most outstanding celebrations are the Day of Andalusia, where there are tastings, dances and attractions for children, the Day of Equality and the Day of Rural Women.

It is worth mentioning the traditional “Farras”, which are celebrated on Easter Sunday and bring together family and friends around food and drink, as well as the peculiar "Cencerrá", which is celebrated with songs and noises of cans and saucepans on the night a couple gets married and one of the two is a widower or widow.
The Patron Saint Festivities, in honour of Saint Anthony of Padua, patron saint of the town, are celebrated in August. The entire town gathers in Constitution Square, where you can enjoy the musical groups and orchestras present and many other activities, like the representations of Moors and Christians.

In addition, the inhabitants of other population centres such as Cerro Gordo, La Cañada and Piedra Amarilla carry out local celebrations with the participation of neighbors and visitors.

Its vast gastronomy is full of a cultural feeling and is based on legumes, vegetables, aromatic herbs and products derived from pork, all of them local ingredients.

Offerings include the sausages, the “migas”, the pot of “segadores”, the egg broth, the “gurullos”, the “remojón”, the stew of “pelotas”, the kid “a la pastoral”, the pig's trotters with ratatouille, the stewed wheat, the fried blood and the “hornazo”.

When it comes to desserts, the “roscos de aguardiente”, the “suspiros”, the “almendrados” and the orange “roscos” stand out.
Almanzora Valley Travel Guide