Do you want to escape to an amazing place?

Then go and visit the wonderful Alpujarra of Almeria, a beautiful region with a magnificent atmosphere full of nature, lots of water and the Sierra Nevada National Park behind it. It's an ideal place for a perfect weekend excursion.

The Alpujarra of Almeria is a beautiful region located in the foothills of the Sierra Nevada, formed by small villages decorated in white with the extensive course of the Andarax river, which enriches the fields and crops of the area, such as almonds, cherry trees, parrales, grapes and other plantations.

The villages lie around the mountain slopes and in them you can see the fields that rise from the sides of the mountain which culminates in the frozen peaks of the Sierra Nevada. In addition, the architecture of Alpujarra makes it a unique place, since the towns and terraces have been influenced by the Arab settlement in the region.

Capital of the Alpujarra

Among one of the admirable villages that you can visit is Laujar de Andarax, capital of the Alpujarra of Almeria, where the water crystallises within almost everything.

The Andarax river travels through much of the area, flowing into rills, streams and rapids and then it divides into two in a region where lush vines, olive groves and orchards are grown. In general the soil is quite fertile and the atmosphere very pleasant. 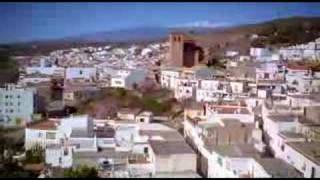 Laujar de Andarax is almost a thousand metres high, with the imposing Sierra Nevada National Park behind it as a gateway, and the Sierra de Gador at the front in all its splendour.

In addition to the landscapes offered by nature, it is also pleasant to tour the long, narrow urban centres, with open squares in the sun, stately homes and the Incarnation Church. The artistic and historical fountains are proud examples of good taste, especially that of the “Cuatro Caños”, which is very characteristic of the place.

Once you find the Laujar de Andarax Visitors Centre, you have two possibilities: to ascend to the “Puerto de La Ragua” and descend over the northern slope of the Sierra Nevada, or connect by the east, with the towns and plains that follow the Andarax river almost from its source.

The “Puerto de la Ragua” separates the provinces of Almeria and Granada, and is an area with great agricultural wealth, where a kind of grape known as “ohanes” flourishes; it is highly prized and gives rise to strong and famous wines.

This town, next to Paterna del Rio, encapsulates the cultural and architectural essence of the Alpujarra. Bayarcal is a white place, with streets and homes that harmonise with the landscape of the mountain and with the other houses. It has hundreds of paths that transport barns of unusual beauty, some of them circulating along the Bayarcal river, which is extremely rich in fishing.

If you travel from Laujar de Andarax to the east, the road to the Alpujarra of Almeria features a handful of picturesque towns of simple appearance, but that hide a great role in history, since some of the hardest battles of the second Moorish rebellion happened in them. For example, the palace of Fuente Victoria sheltered Boabdil, last king of Al-Andalus, when he lost his kingdom to the Christians.

Visit the wonderful Alpujarra of Almeria and you will come across places that have stories to tell, such as the “Casa-palacio de las Godoyas” in Fondon, the Muslim castle of Beires, and the graceful town of Canjayar, where you can travel between Sierra Nevada and Sierra de Gador.

An incredible landscape, stately houses, spas, beautifully designed ceilings, vineyards and breathtaking vistas are some of the wonderful sights to be seen when touring the Alpujarra of Almeria. In addition, it has comfortable tourist villas where you can stay for the night, and sample its delicious traditional dishes served in a 20th century electricity factory, known as “La Fabriquilla”.

The region has much to offer you, so plan your next getaway now and visit the wonderful Alpujarra of Almeria.

You will not regret it!
Alpujarra of Almeria Travel Guide