The origin of Black Friday

"Black Friday", as it is known, is on the day after the celebration of Thanksgiving. This is when shops offer great discounts and promotions on their products, just before opening the Christmas season.

This day, although it is not a holiday as such, has a great importance in North American culture, which has been extended to other parts of the world. It is such a popular day that there are usually long queues outside the shops, even in the days before Black Friday, to get the best discounts, especially on electronic devices. 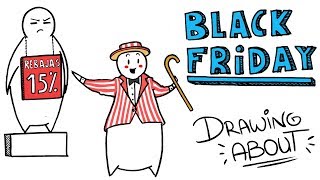 It should be noted that given the increase and globalisation of online purchases, there is also a day known as Cyber Monday", which is the Monday following Thanksgiving. This is when discounts are available for online purchases and are valid for electronic shopping from anywhere in the world.

Origin of the term

As for the origin of the term "Black Friday", there are several theories. One of them points to the fact that it began to be used in the North American city of Philadelphia, given the large number of people and cars that took to the streets the day after Thanksgiving, totally snarling up the traffic.

For this reason, at the beginning of the 60s, officers in charge of traffic control in the city, seeing the dense influx of pedestrians and vehicles, began to refer to that day as black Friday, popularising the term to the point that in 1975 it became a commonly used term in the United States.

Another theory that offers an alternative explanation to the one previously described, is that the root of the term is directly related to small merchants, who according to tradition, ended up with losses or red numbers in the month of November. After Thanksgiving when they started to make a profit, their numbers changed from red to black, hence the term "Black Friday".

It has no relation to slavery

Recently a controversy was generated on Twitter when two celebrities; an NBA player and a singer, pointed out that the origin of the term dates back to the time when black slaves were sold before the arrival of winter, giving a very negative interpretation to the term and concluding that this was the origin of slavery in the United States.

However, there is no historical evidence that supports this last theory, which is somewhat outlandish and therefore has been ruled out, although it has hurt many sensitivities and generated much annoyance, given its racist connotation.

We cannot fail to mention that the term "Black Friday" has been used, and continues to be used, in different parts of the world to refer to disastrous historical events of different kinds, such as stock market crashes, drastic devaluations of a currency, killings of civilians, natural tragedies and warlike attacks, among others.