These mines arose in the 19th century as a consequence of the gold fever that was experienced at that time. Today, Rodalquilar´s gold mines are no more than the vestiges of an era of incredible prosperity. They are visible in several buildings that made up the now abandoned complex, but whose historical and tourist attractions remain, despite the passage of the years.

Located in the town of Rodalquilar, in the municipality of Nijar, the mines were not only known for their gold bearing potential, but also for the exploitation of alum and other metals such as lead. This also contributed a lot of wealth to the region's economy at the time.

The exploitation of gold in Rodalquilar´s mines had a significant boom between 1933 and 1966, especially in the postwar period. 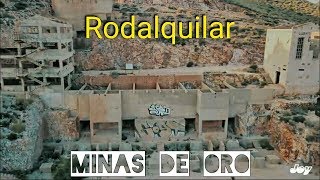 In 1940, in view of the fact that the gold would be used for the payment of arms to the Soviet Union during the Civil War, the mines were nationalised after the few gold reserves held by the Bank of Spain mysteriously disappeared. It was known worldwide as "The Gold of Moscow".

The mines were opened again in 1989, to be permanently closed two years later, without any hope of a resurgence of mining activity in the area, after its declaration as a Natural Park.

The population of San Diego, created in 1930, played a fundamental role in the development of mining, as it was one of the three facilities of the Minas de Rodalquilar Company, where they carried out the exploitation and extraction work.

In this place, you can see the work buildings and among them, homes for executives from Britain were built. It also had accommodation for employees, garages, laboratories and warehouses, among other facilities.

Because of its mysticism and spectacular landscapes, the film industry has also considered the area as ideal for recording, and producers of films such as Duck, You Sucker! (1971), Solarbabies (1986), Indiana Jones and the Last Crusade (1989), The Reckoning (2003) and Summer Heat (2008), among others, chose the Rodalquilar gold mines as a location, thanks to the area's great majesty.

1.- “Las Niñas" Mine: It was founded in 1883 and is one kilometre away from the population centre. It was one one of the main deposits where gold was extracted for years and later, quartz, when it was discovered that it also contained a significant amount of gold.

4.- “Filon 340”: It was located in 1919 and, according to experts, it was excavated among the rocks. In 1963 an exhaustive investigation was made, drilling 165 metres above sea level, which resulted in the extraction of 1,000 kilograms of ore per 12,000 tons of rock that was drilled.

5.- “Maria Josefa” Mine: In this mine, pure gold was found which was free of impurities. This was in 1915 and experts say that the material did not need any special treatment to be extracted. It was quite a discovery!

6.- “Abellan” Mine: Antonio Abellan spent most of his money here on the creation of a processing plant in the area. Although it was established in 1929, the project failed a few months later, registering significant losses.
Cabo de Gata Travel Guide