Fondon, a village with a long history

Within the province of Almeria we can find a town known for its history and for its agricultural and mining riches, which were used for many years as the main source of sustenance for its economy.

This is Fondon, a municipality with 1,002 inhabitants, according to the last census carried out in 2017. It is made up of three locations: Fondon, Fuente Victoria and Benecid.

Also known as the "Llano Andarax", it was one of the main places where the Rebellion of the Alpujarras took place between 1568 and 1571, during the reign of Philip II of Spain. 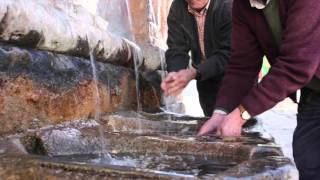 These battles resulted in the exile of the Moorish, until the area was depopulated and was later re-inhabited by Christian families. It should be noted that this same situation has occurred in almost all areas of the Alpujarra.

Fondon is located 846 metres above sea level and 63 kilometres away from the city of Almeria. It also has 92 square kilometres of territorial extension and a population density of 10.32 inhabitants per square kilometre.

Its main sustenance, as we have already mentioned, is agriculture with the cultivation of cereals and olive groves. Also today you can see traces of mining activity in the iron and lead mines, so much so that even today you can still see some houses and chimneys of the time that are testament to the intense mining activities that developed throughout the 18th century.

Places you can visit

There are many places that you can visit when you arrive in Fondon. You will be surprised, above all, by discovering the richness of its history.

1.- One place we can highlight is the "Cortijo de las Paces", which is an ideal representation of the Alpujarra of Almeria architecture. In this place, some peace agreements between Christians and Moorish were signed.

3.- Do not miss the opportunity to go to Our Lady of Anguishes Hermitage and the Town Hall, built in 1790 by the Granada architect Juan de Mata Velasco.

5.- You cannot miss the Fountain of Charles IV, located in Fondon Square and built in 1789.

6.- The natural scenery of Fondon is unique and picturesque, since it is located between the Sierra de Gador and Sierra Nevada. The Andarax river flows through this area, filling the entire valley with abundant fertility.

An area of great beauty

Those who have had the opportunity to visit its streets, have agreed that Fondon is a town of singular beauty, with very hospitable and friendly people whose presence creates a great atmosphere.

What most attracts the attention of tourists who visit this area is the possibility of living the quiet life without pressure, as it used to be in the past.

It should be noted that the food is extremely delicious. The dishes prepared there are real delicacies, which adds another magnificent reason to visit this area of Almeria.

The villages of the Alpujarra of Almeria hide great secrets and huge wonders that are ready to be discovered.
Alpujarra Almeriense Travel Guide