Almeria is one of the favourite places in Spain for filming of large, small and medium sized film productions, which take advantage of its exceptional landscapes.

For more than half a century, the unique beauty of Almeria has served to attract directors and film producers from around the world, who find the perfect setting for all types of films in Almeria.

The beauty of the Tabernas Desert and Cabo de Gata have inspired hundreds of film productions.

For many years, the Sierra Alhamilla and hundreds of other Almerian spaces have offered an imposing desert landscape to be used as a natural setting for numerous national and international productions.

Almeria has been the preferred location to represent exteriors in western films, as well in films where Arabian deserts have been depicted, because of its layout and landscapes adorned by beautiful palm trees.

According to specialists, the locations in Almeria are so versatile that you can record a western scene on one day and on the next day, record scenes based on Arabic locations, by changing only a few details. Added to this is the fantastic weather that Almeria has, which provides the perfect combination. 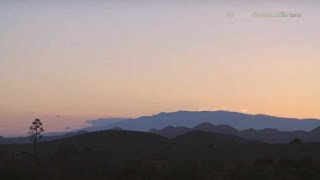 The extensive cinematographic tradition of Almeria has earned it the title of “Little Hollywood”.

Among the most popular films made in Almeria is Cleopatra, filmed in 1963. The Cabo de Gata Natural Park and the Tabernas Desert were the locations chosen by the film's production team where many of the scenes were shot.

Sergio Leone was a great fan of the natural spaces of Almeria, where he recorded scenes for many of his films, in particular, For a Few Dollars More, The Good, the Bad and the Ugly, and A Fistful of Dollars.

Indiana Jones was another saga that benefited from the spaces offered by Almeria, where scenes for Indiana Jones and the Last Crusade were recorded in 1989. The Tabernas Desert, the magnificent Mónsul Cove and the city of Almeria were used as scenarios for this film.

The great Stanley Kubrick also chose Almeria to carry out his project: 2001: A Space Odyssey, a film that won the Academy Award in 1968 for Best Visual Effects. A recreation of the lunar landscape that can be seen through the window of the Discovery spacecraft was filmed in Almeria.

El Cid, Lawrence of Arabia, Gringo, Guns of the Magnificent Seven, Conan the Barbarian, Dollar for the Dead, Doctor Who, Assassin's Creed and some chapters of Game of Thrones, are some of the most outstanding productions that have taken place in Almeria.

However, the list extends to over 100 productions, providing a huge cinematic value to the province of Almeria. The locations of Almeria make it an ideal place to recreate the most beautiful images.