Lubrin, treasure of the Levante of Almeria

Lubrin is located 72 kilometres from Almeria, in the Levante Almeriense region, and is an ideal place to visit for rural tourism.

The municipality of Lubrin is divided into 21 population centres, and like other areas of Almeria, its architecture is closely linked to the Moorish culture, with narrow alleys, whitewashed houses, small squares and pleasant smells of jasmine. 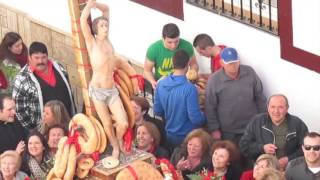 The best months to visit Lubrin are February and March, because it is when the valley is in full blossom, offering visitors a true natural spectacle that invites them to explore its beauty and history. The residents are very highly praised by all, because they offer visitors the best of their hospitality, welcoming you as if you were one of their own.

Lubrin was inhabited by Moorish until 1309, when it was reconquered by the Bishop of Cartagena. In the 16th century, its population participated in the so-called “Rebellion of the Alpujarras”.

From that moment the exile of the Moorish population began, once their uprising had been controlled, until the town was virtually depopulated. With the intention of populating it again, 30 families from Extremadura, Galicia, Murcia and Jaen arrive in Lubrin with all the resources to make a new life there.

The history that surrounds Lubrin can be remembered in each step through its alleys, and it has now become a land of emigrants, like almost all the small towns in the vicinity.

The Bread Festival is one of the most important events in Lubrin. It is a celebration in honour of Saint Sebastian and every January 20th it is staged with great enthusiasm by all its inhabitants. The festival is declared of tourist interest and from the balconies of the houses “roscos” are thrown to the saint during the procession.

According to some historians, this tradition can be traced back to the years when plague epidemics seized almost the entire population. At this time, the wealthy people threw the poorest people food and money from their balconies, to avoid contact with them for fear of becoming infected.

Lubrin is one of the most beautiful villages in the province of Almeria. Don't wait any longer to visit!
Levante Almeriense Travel Guide