Lucainena de las Torres is a small town in Almeria, located in the heart of Sierra Alhamilla. It is one of the towns that is among those known as "The Most Beautiful Villages in Spain"; a distinction that was received in 2013.

The Most Beautiful Villages in Spain is an association created in Spain in 2011, which is responsible for promoting and ensuring the preservation of cultural, natural and rural heritage in sectors where industrialisation does not prevail and the population level is small. In Almeria, only two towns have this honour: Mojacar and Lucainena de las Torres.

It is located at an altitude of 542 metres above sea level and only 53 km separate it from the capital of the province. It is a very beautiful town, with immaculately painted white houses and facades that are carefully decorated with flowers, which makes the setting a really beautiful display. 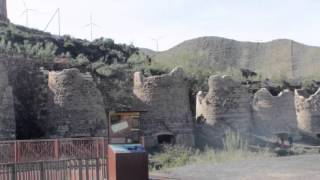 Its streets are perfectly maintained and its people are very warm. All these qualities are, in short, a direct invitation to visit this magnificent town where the air is permeated with a spectacular aroma from the flowers arranged on each of the homes.

Those who have walked its streets have been stunned by its beauty and many have come to say that Lucainena de las Torres is worthy of being portrayed on the canvases of the best painters in the world.

Before mentioning some of the places worth visiting, you should know the characteristics of the climate. The winters are usually quite cold and during the summer it is very hot, with light rainfall, mainly during autumn and winter.

The first church of Lucainena de las Torres dates back to 1505, and is built on the base of an old Arab mosque. Nevertheless this one was desolated by the pirate Omar-Al Askenn. It was not until the 17th century when the current church was erected, that it became known to all as the Church of Our Lady of Montesion.

Among its architectural heritage is the "Windmill". This was an old lookout tower, of the seven that existed in the area, which was later restored and used as a windmill.

Two other tourist gems in Lucainena de las Torres are the "Poyo de la Cruz" and "Garruchete" viewpoints, which are a pair of terraces that offer the opportunity to enjoy spectacular views of the town.

At a location of impressive natural beauty we find the "Peñon de Lucainena", with a height of more than a thousand metres and from which two important springs are born, known as "El Marchal" and "La Fuente".

The "Peñon de Lucainena" offers incredible panoramic views of the entire Lucainena valley and on clear days, you can even see the sea from its summit, as well as the outline of the mountains of the Cabo de Gata.

The calcination furnaces are also part of the attractions of Lucainena de las Torres, which were created for the calcination of iron carbonates before they were commercialised. It is also worth mentioning the public laundries, made for the use of water from the "Peñon de Lucainena".
Do not forget to walk along the greenway, where we will find old buildings belonging to old mining companies, as well as farmhouses, beautiful landscapes and water mills.

Another not to be missed visit is the Town Hall; a building with large windows located right in the central square of the town, in which a small market is set up every Saturday.

Vegetables and stewed meats are part of the cuisine of this Almeria area. The gastronomy is influenced by the climate and the natural resources of the place. Rabbit “gurullos”, stewed partridge, corn balls, pumpkin soup and wheat pot are some of the tasty dishes that visitors to Lucainena de las Torres can savour.

The garlic soups that are served in the area's bars and restaurants are also exquisite.

Undoubtedly, Lucainena de las Torres is one of the most beautiful and exceptional towns in the province of Almeria, which you should definitely not miss.
Filabres-Tabernas Travel Guide