The province of Almeria is a whole box of surprises.

Macael is only 75 kilometres from the capital of the province and is known throughout the world for its riches of marble, in addition to its citizens who are faithful devotees of the Virgin of the Rosary.

We present 10 reasons to visit Macael. 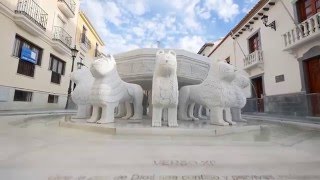 1. Climate: Its climate is quite pleasant; not very hot although it is usually very cold in certain seasons. The average temperature is 16º C, but when the cold arrives, temperatures can drop to -5º C. These frosts usually occur between January and February, with the rest of the year being milder. Thanks to its climate, the landscape is made up of pine, oak, fig and olive trees, which makes it a very green and very beautiful village.

2. History: Its legend is intimately related to its main attraction: the white marble of Macael, which is why they call it "The City of White Gold". Although the first people to make use of these riches were the Phoenicians who used it for the construction of their sarcophagi, later, like many other towns in Almeria, Macael was also occupied by the Muslims.

3. The largest mortar in the world: It was decided that "The City of White Gold" should have something built to honour its legacy. For this reason, a monumental structure of 50,000 kilos was created; it is supported on a marble stand and it was made with yellow marble with the joint participation of two companies. The work is valued at more than 300,000 euros and is its main tourist attraction.

4. Gastronomy: This always represents the culture of a people. The “migas” are traditional in Macael, which are accompanied with paprika broths, fried dry tomatoes, fish and “tajadas”. For the desserts they specialise in “tortas de chicharrones y mantecas”, “pan de aceite”, “suspiros” and “mantecados”. The “potajes de cuaresma”, “albóndigas de bacalao” and “roscos fritos” are also delicious and typical of this locality.

5. Handicraft: Marble is much used in Macael. There are workshops of various types, the best known being marble mortars. You can learn how to make and even take home your own handcrafted mortar.

6. Constitution Square: This is the most outstanding feature of the town of Macael. It was recently renovated in 2015 and is located right in the centre of the village. The stately houses from the beginning of the century stand here and on the north side is a replica of the famous Lions fountain of the Alhambra (Granada).
7. Virgin of the Rosary Viewpoint: Being dedicated to the Virgin of the Rosary and having one of the most beautiful viewpoints of Almeria are characteristics of Macael. It is located on the top of a mound crowned by the White Virgin of the Rosary, which was made with the purest marble of the region.

8. May Cross: Here is another of the great handicrafts that identify the region, also made of marble. It consists of a column that holds a cross of white marble measuring 2.5 metres high. On its base it has an inscription in old Castilian that dates from 1683.

9. Tranquility: Macael is a quiet town of working people who welcome their visitors most attentively. Its restaurants and inns attest to this hospitality.

10. The Lions Fountain: Macael also has a replica of the Lions fountain of the Alhambra (Granada). It is flanked by 12 lions of different sizes that are arranged in groups of four. In the centre there is a cup measuring 262 centimetres and 49 centimetres wide that is inscribed with a poem dedicated to Macael.
Almanzora Valley Travel Guide