Framed in the northernmost point of the province of Almeria, the region of Los Velez is a tourist gem preserved by an ancient tradition that holds a deep respect for nature and the many treasures scattered throughout the region.
It contrasts with the rest of Almeria with its landscapes of mountain ranges and leafy forests, that offer a cool and temperate climate.

It is divided into four municipalities: Velez-Blanco, Velez-Rubio, Maria and Chirivel.

It prides itself on its quiet villages, full of rural houses where time seems to stop, with snowy summits in winter that contrast with the more arid locations within the same province.

Of the most important legacies of Los Velez is the cave art preserved in its caves. It was declared a World Heritage of Humanity Site by Unesco in 1998, giving rise to numerous protected zones within the region of the Sierra Maria-Los Velez Natural Park. 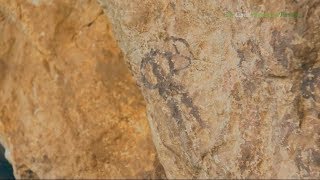 This park crosses the four municipalities, and the caves of the region are of Spanish historical heritage. The most famous is the Letreros Cave, perhaps the most important rock art in the country.

In this cave is where you will see the Indalo, which is today the symbol of Almeria.

The figure is a man holding a bow, and although it does not have a formal and precise meaning, several theories point to that it personifies a divine being.
This representation can be found in logos of companies and local businesses, besides being part of the crafts and souvenirs of Almeria; an Indalo is going to be a precious jewel from this corner of the world.

The wealth of Los Velez is not only archaeological, but also boasts the imposing Velez-Blanco Castle. This magnificent building was built on orders from Pedro Fajardo y Chacon, after being named Marquis of Los Velez in the 16th century, and it was built on an imposing Arab “Alcazar” that was modified during the Reconquista and the Renaissance.

The castle has undergone numerous transformations and changes of status over the years, and is today considered a place of cultural interest, making it a must stop for anyone visiting Velez-Blanco. You cannot miss its majestic figure, as it stands proudly in the middle of the white village and lime covered houses.

The large plateau where Incarnation Square stands in the town of Velez-Rubio is one of the most visited attractions. Exploring in detail the Church of Our Lady of the Incarnation, which presides over this town, will be a relaxing and unforgettable walk. This building is an imposing example of the late Baroque period, and the temple is also of cultural interest.

In this charming little village that retains its rural structure, there are rivers and streams that water its fertile lands (a characteristic shared with the town of Maria), besides offering extensive plains and canyons.

The first thing to notice is that its inhabitants safeguard with the highest standards the traditions and customs they have inherited; both artisan and culinary. Its Muslim roots and those inherited in later stages coexist and complement each other day by day, in particular, the artisanal production of honey.

Los Velez also offers a growing range of outdoor sports, such as excursions, as within its quiet towns there are also many young people willing to share with tourists the sense of adventure and harmony with nature that permeates the whole region. With this and many other activities on offer, the Los Velez region  will provide unforgettable memories for visitors of all ages.
Los Velez Travel Guide