Picture: Ministerio de la Presidencia. Gobierno de España
Carlos Herrera Crusset is a famous and popular journalist from the province of Almeria. He is recognized as one of the greatest exponents of Spanish journalism. While dedicated mainly to radio, he also stands out in other media, such as the written press and television.

He was born in Cuevas del Almanzora on July 8, 1957. He has a degree in Medicine, an activity he has never practiced. He has two children from his marriage to the also-well-known journalist and television presenter Marilo Montero, from whom he divorced in 2011.

The beginnings of Carlos Herrera

His beginnings go back to 1977 on Radio Sevilla, from where he moved to the recently inaugurated Radio Mataro. Later, he was on Radio Miramar in Barcelona and then Radio Popular in Seville and Madrid. From there, he went on to the circuit of national stations, working on Cadena Ser with the program “Coplas de mi Ser”, and then on Cadena Cope (1997) with the program “La Mañana”. 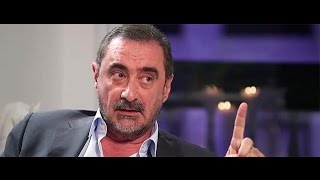 After two years on Canal Sur Radio, together with other presenters, Carlos Herrera went to Radio Nacional de España in 1999 to host the program “Buenos Días”.

In 2001 he began his journey through Onda Cero with the program “Herrera y Punto”, which in September 2002 was renamed “Herrera en la Onda”—a name it held until March 2015. From September 1, 2015, he has presented, from 6:00 am to 1:00 pm, the morning “Herrera en Cope”.
Carlos Herrera's work on television stood out with the presentation of “Telediario” in 1985, together with Angeles Caso. He was also recognized for his success with the program “Saturday Night” with Bibiana Fernández.

Regarding the written press, it is worth highlighting his collaboration with Diario 16 and Cambio 16. Also, he has a column in the newspaper ABC and another in the magazine Diez Minutos. Carlos Herrera contributes opinion articles to the weekly magazine Dominical. He is also the author of a multitude of books, most of them compilations of his great radio moments.

Carlos Herrera has received many awards during his long and successful career. Following are the highlights: