Enix is located at 716 metres above sea level and at a distance of 26.7 kilometres away from the Almeria city.

It is a small Almerian municipality with 434 inhabitants, according to the last census conducted by the National Statistics Institute (INE) in 2017. It has an area of 66.84 square kilometres, which represents a population density of 6.49 inhabitants per square kilometre. 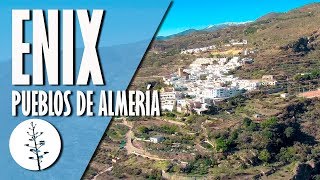 Enix is famous for its water resources, so much so that it is said that its name comes from the Germanic word “Nix”, related to springs or fountains.

It was precisely the abundance of water in this territory that began its foundation during the era of the Moorish, adjoining lands that in the future would become Felix and Vicar.

After the arrival of the Arab peoples to the location, the name that “El Nix” had was respected and retained.
In addition to an abundance of water, good communications with other cities and their high defensive possibilities allowed old Enix to increase its population.

Its infrastructure makes it look as if time has not passed by there, as in its streets medieval traces still remain that are amazing with their irregular shapes and turns.

Part of the history

A historical figure within the population, the Marquis of Los Velez, was a decisive influence between 1568 and 1570, since his troops were responsible for putting down an uprising by the Moorish population.

During this event, one of the cruellest in Spanish history, those Moorish who did not perish during the confrontation were used as slaves, until none were left to enable repopulation by settlers from the Levant and Castile.

Another fact of vital importance that also left traces in the municipality was the mining boom of the 19th century. The activity began to take place in the Sierra de Gador, which affected Enix considerably.

One of the most exploited sites of the time was the “El Carmen” mine, which is currently completely deserted. From there you can see vestiges of the activity that at the time was very intense.

Deforestation is one of the most serious consequences left by mining, the effects of which are still present. 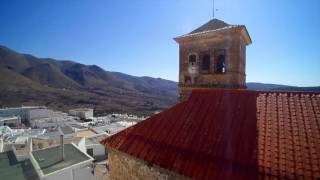 Only some small areas of its forests remain, including the “Barranco del Madroño” and the “Loma de la Encina”.

The few people still living in the municipality are dedicated to the cultivation of vines, olive trees and almonds; crops that are for their own consumption. Many others work in reforestation and greenhouse agriculture, which has made the province of Almeria extremely famous.

If you have thought about visiting Enix and its surroundings, do not forget to add the following places to your itinerary:

Low Alpujarra: It is a territory dominated by the cultivation of grapes, figs and almonds. It is also common to see plantations of custard apples, bananas and avocados.

Almeria coast: The Almeria coast comprises more than 200 kilometres of coastline with magnificent beaches, worthy of family enjoyment. It is an option that you cannot miss during your visit to Enix.

Poniente Almeriense: Very close to the municipality of Enix, you can find beautiful beaches and fantastic sports facilities. You can practise activities such as sailing, golf or hiking.

Do not miss the opportunity to visit one of the most remarkable corners of Almeria.
Poniente Almeriense Travel Guide