As in other corners of the province of Almeria, there are essential elements of gastronomy that contribute to the knowledge of the history and culture of a locality. An essential element of gastronomy in Dalias consists of the products derived from agricultural work and the orchard. It is precisely the products of the land that enable the traveller to know and remember the flavours of the town of Dalias.

Among its main recipes, for which any gastronomy fan should go to this town, is the présules omelette, to which, in addition to the présules, other vegetables such as carrots and elements derived from pork (like ham or chorizo) can be added. In most of its presentations, it has a taste between sweet and salty, and can be consumed at any time of the day. It can even serve as a tapa to share with friends. 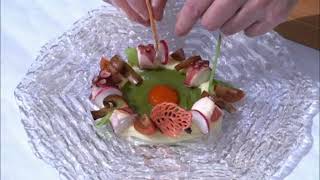 This omelette has become an identity mark for the inhabitants of Dalias.

Présules (sweet peas) and Tirabeques have been produced in the area since the early 20th century and are among the highest value local produce.

In fact, Dalias celebrates the so-called Big Week of the Présules omelette, where tastings and gastronomic samples are held in which haute cuisine is available to everyone.
This is an event held with the support of local businesses that seek to publicize the elements making up this famous dish. That pride is what the inhabitants of Dalias feel for the cultivation of these peas, which acquire an exquisite and clearly differentiated flavour thanks to the benefits and exclusive particularities of the fertile land of Dalias.

We must also highlight other elements of the local table. Dalias offers its well-known gazpacho, which is a reinterpretation of the traditional gazpacho made with fresh tomatoes. In addition to this, we cannot forget the snail sauce, the cod stew and the fried vegetables and meat, among others.

The local gastronomy is influenced by both the climate and its most popular festivals. For this reason, in Dalias you can try a wide variety of fresh salads and cooked salads such as roasted peppers, tomatoes and onions.

In addition, Holy Week is a fundamental occasion in which the best of local cuisine is shown. Here, it is common to prepare dishes such as Holy Week pottage, présules omelette and flour or bread Migas, among others.

These dishes are always present in its most important festivals, such as the Alpujarra Traditional Music Festival and the festivals in honour of the Holy Christ of the Light, among others.
Share our Travel Guide