This is a festival of great significance throughout the Almanzora Valley region. It takes place in Macael and transforms the entire town into a stage in which history and the present are mixed, creating an environment of culture and fun.

A tradition with centuries of history

The tradition of stonemasons has its origin several centuries ago in Macael, where knowledge of this profession has passed from generation to generation since Roman times.

The Stonemasons and Chieftains festival was born as a reminder of the struggle that the stonemasons-artisans who worked in the marble quarries at the beginning of the 20th century maintained. They fought to maintain the communal character of these places, presenting opposition to the authorities (the Chieftains) of the time, who wanted to privatize these quarries. That struggle intensified in 1919, when the “Quarry Lawsuit” took place. It lasted until 1947, when a ruling made it clear that Macael marble could not be privatized and belonged to its people. 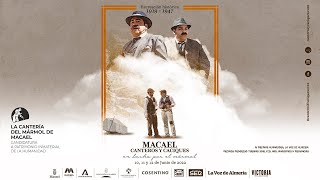 Through theatrical and artistic performances based on the book "Stonemasons and Chieftains in the Fight for Marble", the festival recreates those disputes, giving the event a historical character and allowing visitors to know what life was like for the inhabitants of Macael in the first half of the 20th century.

In the current celebrations, you can find a great gastronomic offer. The typical tapas and traditional dishes are recommended, such as rice with broad beans, porridge, migas and fried rabbit.
All these dishes can be enjoyed in bars and restaurants, as well as in the gastronomic demonstrations that take place every day of the festival. There are also musical and artistic celebrations, including those taking place on the theatrical stage.

In addition, there are different representations related to the quarry industry, such as traditional work and forging techniques. You can even see the loading of a piece of marble on an ox cart. Other representations allow you to see the work of artisans and sculptors. Children enjoy this festival to the fullest, as different games are organized every day for the little ones to participate in.

Macael's marble tradition has turned the town into a place of tourist interest. All year round you can find stone craft workshops. In a visit to one of these workshops, you can learn the steps that the artisans follow, from when the stone leaves the quarry until it is transformed into a work of art. You will also see the tools used. The tour is done with a guide who explains these steps and shows you the large number of companies that exist in Macael and are dedicated to this industry.

All this can be completed with a visit to the Marble Interpretation Centre, where you will learn about the evolution of the exploitation of stone in Macael and the different techniques that have been used to work and move marble over time.

If you want to go to the origin of everything, in Macael you can visit a quarry, where you will learn about modern extraction systems. You can even work a little, to feel first-hand what the work of a stonemason is like.

The best Tours & Activities in the province of Almeria