Tabernas, the desert of Almeria

Did you know that Spain has an historic cinema set?

Few people know this, but in Almeria there is a great natural space with an impressive cinematic panorama that we will introduce you today.

About 30 kilometres north of the city of Almeria, we find 280 square kilometres of the Tabernas desert; a region known for being the driest in Europe. You may think that there is only one type of desert climate, but temperatures here change a lot during the year. 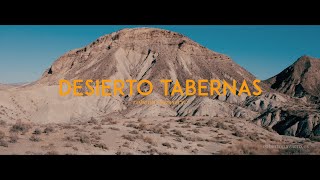 This desert was declared a Natural Park in 1989 and in addition, it is quite close to another of these wonderful spaces: the Cabo de Gata.

The best time to go to Tabernas is definitely during spring. That is when the temperatures are milder, you do not see the intense sun of the desert climate and you will be in an intermediate and pleasant environment, taking into account that in Tabernas temperatures can vary from -5 to 48 degrees Celsius.
In fact, Tabernas can be defined as a semi-desert, as it is a xerophilous scrub landscape. The interesting thing about this fact is that it is the only true desert within Europe, constituted by a series of extremely complex climatic, geographic, anthropological and edaphic factors. These are combined to form the marvellous landscapes, which can even be compared with the views of Saharan Africa.

A Hollywood set in Spain

Perhaps many do not recognise the name of the Tabernas desert, but at one time they will have seen it in the movies or on television because it has been the setting for many famous films that were filmed during the 1950s. After that, its popularity grew among important film houses that filmed the well-known feature films about the "far west" that have been shown around the world.

Exploring the fascinating activities that took place in Tabernas, we found several films of the "Spaghetti Western" subgenre also known as the European Western, which was in fashion between the 60s and 70s.
This desert has a great resemblance to the deserts of the Wild West in the United States, so many directors, including the greats like Clint Eastwood and Sergio Leone, took Tabernas into account as an ideal setting for filming such works as:

There is a fairly recent film that was filmed in Tabernas, which is Exodus: Gods and Kings (2014).

Its rocky and desert landscape allowed it to be the place for great actors like Harrison Ford, Sean Connery, Claudia Cardinale and Brigitte Bardot to make memorable works.

What should you know about the Tabernas desert?

If you are planning a visit to this wonderful place, there are certain places that you cannot miss.

Taking advantage of the fact that we have been talking about the relationship of Tabernas with the cinematographic world, thanks to decades of productions, a thematic town was created which is located near a canyon, which gives the impression that you have travelled outside of Spain and several decades back in time.

We have just described one of the fourteen villages that were built in Tabernas to give it its characteristic resemblance to the Far West. After filming all those feature films, the spaces remained and nowadays they serve to give their visitors the experience of being in the old west with cowboys, sheriffs and villains.

How to get there?

The most common route is to take the A92 and then the N340, that way you will enter the desert dunes.

Where can you stay?

There are holiday homes and villas around the Tabernas desert. They have the comforts of home, but in this totally different environment, you will live an experience in an authentic space of Hollywood, located in Andalusia.
Filabres-Tabernas Travel Guide