David Bisbal, singer, composer, and representative of Spanish-speaking pop music, was born in Almeria on June 5, 1979. His voice and overwhelming presence on stage began to conquer the hearts of the world after he passed through the first edition of “Operación Triunfo”, a reality show on Spanish Television dedicated to discovering talents that had an overwhelming success around the world.

Every weekend for four months throughout 2001, the contestants prepared their songs to defend them before millions of Spaniards. “Quiero”, “Suave”, “Sueña”, and “Solo Otra vez” are some of the songs that the singer defended with immense skill, charisma, and commitment. He was one of the few contestants who was never nominated to leave the contest.

With the support of the public, David Bisbal came in second place after Rosa, representing Spain a few weeks later at Eurovision along with other colleagues from the contest. But his true success was due, in part, to the support he received from the “Vale Music” record company and the famed composer, Kike Santander.

With his unforgettable “Ave María” from the album “Corazón Latino”, he achieved his first tour of Latin America, where the public followed him from the first moment and in whose lands he not only celebrated his concerts but also filmed many of his video clips. 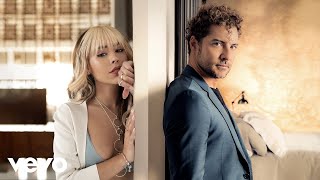 After this, his career was full of triumphs. He won his first Grammy as Breakthrough Artist in 2003, while in 2009 he won Best Song of the Year for “Aquí Estoy yo”. In 2012, he won the award for Best Pop Vocal Album for “Una Noche en Teatro Real”. In recent years, he has added innumerable more awards.

David Bisbal has always kept his personal life very private. The audience of “Operación Triunfo” witnessed the relationship with his contest partner, the singer Chenoa. Later, he had his first daughter, Ella, with designer Elena Tablada. In 2018, he married the Venezuelan Rosana Zanetti, with whom he has two children.

In the beginning, David Bisbal dedicated himself to gardening, alternating it with his presence in the “Orquesta Expresiones”, well known in his native Andalusia, which, as he has repeatedly commented, was his true school.

Many years after his first appearance on Spanish television, his fans remain faithful and admire his growth as a singer.