The capital of the province has a lot to offer you, from monuments and landscapes that take your breath away, as well as small secrets that cannot be missed.

Almeria will give you lasting memories. It has a cosmopolitan life mixed with the carefully preserved Historic Centre, which provides easy access so you can get to know the rest of this magical province.

Below we present our 10 reasons to visit Almeria city. 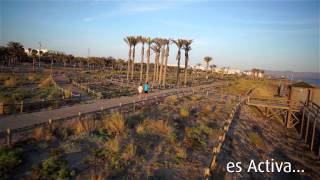 1. The Cathedral Fortress: Located in the historic centre of the city, you cannot miss the cathedral that has a specially reinforced exterior that served to defend the city from pirates. With a huge Renaissance door and elements that mix different architectural currents that attest to the transitional times when it was built and renovated, it is a must see in the city of Almeria.

2. Underground Refuges: This exciting series of ducts and tunnels, originally more than 4 kilometres in length, dates from the Spanish Civil War and were completed in 1938. Used during the German Bombardment of Almeria during the Franco regime, they were forgotten and  rediscovered in 2001. They reopened to the public in 2006 as a tourist attraction and quickly gained huge popularity, since they are the best conserved in all Spain. Explore them through guided tours of 1 km, which are accessible to everyone.

3. The Alcazaba that reigns over the city: With almost thousand years of history, this imposing building is of incalculable archaeological value, being a reflection of the different times of the city. With its walled enclosures and a fantastic view of the city at its feet, the Alcazaba of Almeria is a perfect setting for great photos and even better memories.

4. The Museum of Almeria: Reopened in 2006, it is the most important museum of the province and has the best archaeological collection in the region. You can walk through and discover the agricultural, military and religious past of the province, recalling the Roman, Muslim and Catholic periods. With many visitors a year, the museum captivates everyone with its magic.

5. “Tapeando” with experts: “Tapas” are so important in Almeria that you can not only enjoy them with friends in the different bars, restaurants and taverns, but you can even hire guided tours for tasting tapas at the typical bars of the old town ... You will be instructed with pleasure.

6. Relaxation and comfort: Boasting of its Muslim heritage, Almeria has an important range of Arab baths that will allow you to relax after the various activities and shopping that can be done in the city. Almeria also has spas and other establishments where your comfort is the ideal goal.

7. The Railway Station: Built thanks to the mining boom of the 19th century, this beautiful central building with its glass and iron façade is first and foremost functional; but it is still a vestige of the transition from traditional building materials to a industrial era.

8. The English Cable: The clear importance of mining is observed in this architectural wonder established in 1902, allowing fast loading onto the ships in the port of the material coming from the mining trains. The English Cable served as a direct supply link between land and sea.
9. The Cinema House: Recalling the history of Almeria with cinema from the beginning of the spaghetti western to more recent productions, this museum also pays tribute to John Lennon, who lived for a time in this particular farmhouse while filming How I Won the War. With photographs, costumes, screenplays and 3D projections, the Cinema House offers you a tour of Hollywood history and its link with Almeria.

10. The Wall of Jayran: Descending from the Alcazaba reaching San Cristobal Hill, King Jayran ordered the construction of a wall in the 11th century to defend his dominions. Crowning its walls are 7 of its towers that are still preserved; 4 of them of the Templars of Alfonso VII. Beyond its historical value, you can take some great pictures of the city and the Mediterranean from the wall.
Almeria Travel Guide